Pressure cooker for the steamed rice

We have one of those big seafood steamers.  Two parts of porcelain covered steel, the bottom part has a spigot on it.  The top part has holes in its bottom for allowing the steam up into the top.  Probably have to heat up a gallon of water and the rice needs to steam for one hour.  Heats up the house a lot, good for a really cold day. 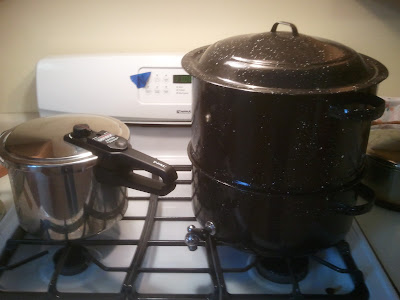 I should remember to shoot the photos from a lower elevation ;-)

I read someone was experimenting with a pressure cooker.  We have this little six quart cooker from TFAL and it has a nice stainless steel steaming basket perfect for the rice.

Only two cups of water and twenty minutes cook time after it comes up to pressure.  A major savings in time and energy.

The big bonus, it made the best Kome Koji so far. 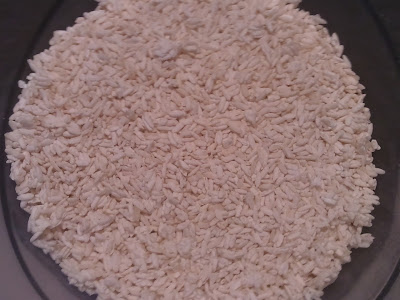 The Naan bread recipe in the Chicken Curry recipe a few days ago makes about sixteen little balls.  We don't need that much bread for a couple breast halves.  We set aside four balls to rise and cook immediately. The remainder we froze in zip lock sandwich bags four to a bag.  Since then we have had occasion to use these loaves and they are as good as the fresh.  Take them out of the freezer, as they warm up they will rise to about double.  Flatten out by hand and cook in the cast iron pan with a little olive oil and sea salt.

Excellent fresh bread with very little effort.
Posted by mlm at 10:57 AM 2 comments:

There was likely twice this amount. It is plenty hot but not enough to burn the lips or water the eyes. 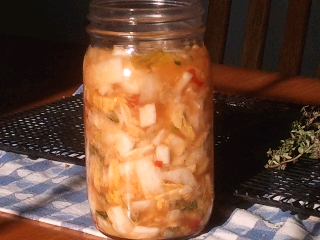 For you eagle-eyes, that is thyme on the drying rack
Posted by mlm at 11:33 AM No comments:

We have made this recipe many times over the past five or six years.  We don't make it often enough to use up those spice bottles of curry fast enough to assure fresh curry each time.  Same goes for many of spices we keep around.  We picked up some fresh curry from the Grain Train. They have a fine selection of bulk spices that seem to get constant turnover.

We'll start purchasing in smaller quantities to insure freshness. Even though the curry is inside a zip-lock bag the smell of the curry calls from the spice cupboard.

We use a recipe that was printed out back in 2007 but you can find the Chicken Peanut Curry recipe at SimplyRecipes.com.   We typically cook only two half breasts so we scale it down a bit.  We didn't have serrano peppers so we use pickled jalapenos.

We use a Naan bread recipe that Marilyn got from a cooking class but it is exactly the same as this one, found at MyBakingAddiction.com. The recipe calls for grilling the bread, we have used a grille pan and usually just use the large cast iron pan.

Doburoku Sake is ready.  A good excuse to be sampling alcoholic beverages before nine AM (small sips, not big gulps)!

If you read the link up there on Doburoku it says that it is nothing like the Sake we know from the Japanese Steak House.  The place where a bunch of strangers sit around a big cooking surface and watch the guy with the big knife toss shrimp tails into his hat.

I can say that it is indeed nothing like the hot stuff we might have tried at Benihana.  According to the Benihana link they rate Sake on a scale of sweetest -20 to driest +20.  They rate their hot Sake +3 so slightly dry.  For mine, I think I would venture a WAG at maybe -5 or slightly sweet.

It  is intended to be served cold and it comes out of the cold room at about 58 F.  It has a curiously sweet and tart flavor, maybe a little reminiscent of a tart apple. That tartness may be the citric acid that is added to the water at the start of the fermentation stage.  It is slightly milky in color and leaves a pleasant taste in your mouth.  Hard to guess the alcohol content but I would guess it is mid-teens or higher.  I have learned that the vinometer is not reliable when there is sugar left in the brew.  A beginning hydrometer reading would be of little use since the Koji mold continues to convert starch to sugar as the fermentation continues.

It has been fermenting for nine days at an average temp of about 60 F.  There is a little bit of bubbling still going on, a bubble here and a bubble there. Nothing like the batch that went in last night that is bubbling so much you can hear it before getting too close.  Last night when I put the new batch in storage I checked the older batch and could detect a change in the aroma, from sweet to something different, not sour but no longer sweet.  This is my first time and I don't want it to go sour so today is the day.

The sewing machine is out and I have a tee-shirt that I am going to sew into a straining bag to be used to strain out the nearly four pounds of yeast and mold eaten rice or the "lees".  They say the lees can be used to pickle vegetables and are often eaten as a side dish or desert.  We will see about that.  They will be full of probiotics for you you foodies out there.

Update: Straining bag complete with no challenges from the sewing machine, yeah.
More update: the lees or leftover rice may indeed make a very sour pickle.  After a little taste I don't think I will be eating it.  Maybe a good addition to some animal feed.  It's on the compost pile.  The filter bag worked as intended.  I got a little more than one gallon of Doburoku.

11/19 two quarts are gone, the rest is in a 2 quart mason.  It has cleared down to half and tiny bubbles can be seen rising from the milky bottom, looks cool.
Posted by mlm at 10:25 AM No comments:

Kimchi was the project of the day.  A second batch of sake went from Kome Koji stage to fermentation stage as well today.

Marilyn pulled a couple of recipes from the internet, we decided to fall back on the processing directions from Sandor Katz, Wild Fermentation recipe.

A decent sized head of Napa Cabbage, a nice bunch of Bok Choy, a very nice hunk of Daikon Radish, grated ginger, some fresh garlic, onion and scallions.  There was some competition for the scallions so we split them up.  Marilyn was making some chicken curry that needed scallions too (it was wonderful and deserving of a second story).

We ended up with nearly two pounds of cabbage, bok choy and radish so the recipe had to be modified upwards to meet the quantity.

The cabbage and  Bok Choy were cleaned and roughly chopped.  The radish was peeled and grated. The vegetables were then brined in a 1 TBS per cup solution until everything was soft, about three hours.

The scallions, onion, dried red peppers, grated ginger, garlic, Louisiana Pepper Sauce and  fish sauce were combined and allowed to sit out to bring out the moisture from the onions.

The brine was drained from the vegetables and the vegetables tested for taste, very nice.  The drained vegetables and spice onion/pepper/garlic mix was tossed together with a little of the brine and put into a primary fermentation bucket, the mixture weighted down with a Pyrex lid and mason jar full of water.  It will probably remain there for a couple of day and then into the fridge.

I can say that it will be snarfeled the entire time as the mixture is delicious.
Posted by mlm at 11:00 PM No comments:

The batch that started Monday soaked overnight before steaming.  It has not had consistent 86 degrees for a couple of reasons varying down around 80..  But today it looks like the best batch yet.  It smells great and for the first time it looks like the pictures.  The grains are not sticking together and they are mostly covered in white.  I'll soak the remaining 3 pounds of rice overnight and steam it up tomorrow.

I think the difference is that I did not follow the two hour soaking instructions at VisionBrewing but rather the eighteen hour guideline in other online instructions.

Should be fermenting by afternoon tomorrow.
Posted by mlm at 2:24 PM No comments:

A new batch of rice is soaking and ready for starting another run.  First steam the rice, cool it down to 86F, inoculate with Koji-kin, incubate and wait for the sweet smell.

Then soak and steam the the remaining rice.  Let it cool and add it to a gallon of RO water boiled and cooled, add citric acid, then add the inoculated rice and the yeast, stir, cover and let it ferment in the cold room.

The stuff that is fermenting in the cold room now is smelling and tasting very nice.  It is supposed to be stirred each day.  It could be ready Wednesday or Thursday but it has been a bit colder than 66F in the closet and may require additional time.

The destructions (sic) say 18% ABV levels are common using this technique.  Most beers are in the 4-5% range.

This home brew style of Sake is called “Doburoku”.  The batch should yield about a gallon.
Posted by mlm at 12:51 PM No comments:

A new batch has gone into primary fermentation.  This time it is a premium sushi grade medium grain rice.  The Kome Koji is fragrant and slightly beige, about 400 grams dry.  Added to a gallon of boiled RO water, three pounds of steamed rice, Champagne yeast and citric acid.  One of the bedrooms with the door closed gives a sixty degree fermentation environment.  The beginners recipe at vision brewing is the model.  I am confident that the previously encountered problems have been eliminated.  Hoping for success.  Hooch is a lot easier.

Update: it is bubbling nicely and smells good at 60 degrees in the closet in the spare room.  Better start making a straining bag.
Posted by mlm at 11:38 PM No comments:

The van is for sale. Not likely the Oh-Bungler economy for the next four years will be producing new construction.  I posted on FB 11/7 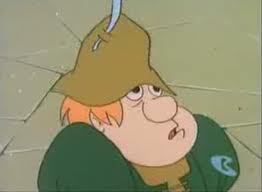 My road to Sake took a detour through a swamp.  Or it smelled like one.  First, that cheese smell I talked about is only bad.  That batch is on the compost pile.  The next batch that included  the Koji with the wonderful smell was somehow compromised. Two possibilities, not sure which, maybe both.  Also on the compost pile.

In the mean time I did a little side project.  The rice wine hooch was very successful with little effort.  I keep thinking that simple worked back in the old days.  A bit of research reveals that tomatoes and molasses both contain nutrients that yeast needs to thrive.  Being a big fan of a good Bloody Mary mix, I thought about a tomato hooch.  It turns out that ketchup is often used as a primary fermenting component by those finding themselves confined in governmental institutions.

A big can of tomato sauce, a little can of tomato paste, a couple tablespoons of molasses and three cups of sugar.  Boiled up with a gallon of RO water and four finger sized dried hot red peppers.  It fermented wildly. I racked it after five or six days into a glass jug with air lock.  It cleared to a redish color reminiscent of Cider Vinegar.  Only about a quart is left.
Posted by mlm at 9:00 PM No comments:

This is all that is left. 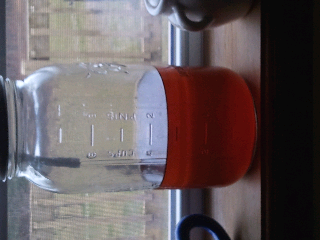